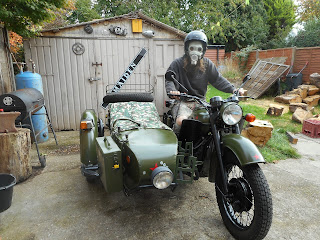 The Dnepr when I first got it

It was sat on the Cossack Owners club stand at the October Stafford show, looking immaculate, and with a for sale sign smiling coquettishly at me. Gave it a slightly excited look over, clearly a fresh restoration. Some phone calls later and a deal was made. A week or so later I collected it.

I'd previously bought an MZ, despite everyone being an expert in how crap they are, and was pleasantly surprised at what a great winter bike it is-3years later and I've barely touched it mechanically. So, I was a bit sceptical as to how bad bikes from the Iron Curtain really were. I was in for a bit of education...

A few problems made themselves known immediately. The brakes were purely decorative, the wheels a bit wonky, and it wouldn't do more than 50mph. Within two weeks the engine had crapped out, and I'd found signs that the person who rebuilt it was a bit clueless. So, it got dumped under a tarpaulin for 6 months until the pain of shelling out 3 grand for a large garden ornament had subsided. Then I got a plan together. Everyone knows you can drop a BMW engine into these...

Most obvious question, why not put a chair on a nice BMW? Adding a sidecar to a bike is a very involved job, requiring all sorts of lugs and brackets adding to the frame. Also, the /5 and later BMWs aren't designed for sidecars at all, meaning lots of bracing is needed. Whereas the Urals and Dneprs are built as outfits from the factory, so will be easily up to the job.

Let me be clear though, Russian bikes are absolutely horrific quality. Everything is done to the lowest possible standard, presumably because only a decadent capitalist would take a bit of pride in his work. Also, they were built under one of the most dreadful regimes of modern times, so if the boss raised production targets by 500% you gave him whatever crap you'd hacked out. I will describe how to fix some of this later. 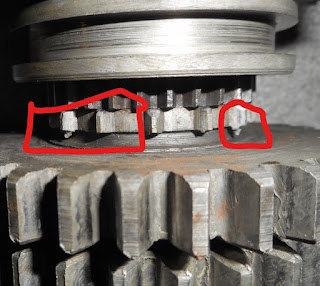 Here's a preview of the gearbox-the teeth were covered in burrs, circled, and the finish of the machining was dreadful

The biggest concentration of woe is the engine. The stock 650 lumps are pretty gutless, have poor lubrication and absolutely useless alternators. The later bikes suffer from too much power, meaning crankshafts tend to let go. Even then, they struggle to beat 55mph. Later Urals had 750 engines, which to begin with weren't much better. As well as the alternator, the rest of the electrics are pretty terrible too. Replacing engine and (by necessity) wiring removes a lot of problems.

Despite the quality, remember that the underlying design of the bike is German. They are well thought out, and easy to work on, once you address said build issues. They look like a much older bike and you get a reverse gear! Watching peoples amazement as the funny old bike suddenly goes backwards doesn't get old, and it is very practical. Some of the bikes come with a driven sidecar wheel, which apparently handles much better, and is great fun off road. This is only available on right hand chairs though-I'll come to them and their legal standing later. Sadly, mine is only 1WD, and it turns out you need an entire new sidecar chassis to fit 2WD. Still, it could be done.

Bottom line is, you get a fun, reasonably practical vehicle, with classic looks yet reasonable performance. It is not a job for the beginner though, and if you don't have a tame machinist, forget it.

At time of writing, I've had my outfit on the road for 3 days, and I love it. It handles well, and the engine has the perfect amount of power. I've not just thrown an engine in, I have reworked pretty much every part of the bike.

Over the next few entries, I shall describe how I did it. It won't be a definitive guide to bastardising all Russian bikes, but it will be as detailed as I can remember for this particular mix of parts. Some of it will be useful even if you're not doing a swap.
There are a lot of myths, contradictions, and the odd bit of utter rubbish out there. I'd like to pretend I could clear it up, but I'll only end up adding to the confusion I'm sure. 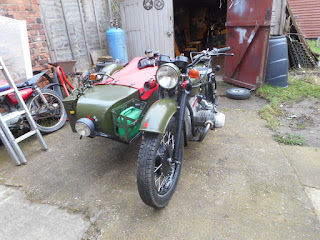